Today, SaskPower, Flying Dust First Nation (FDFN), and Genalta Power (Genalta) announced the signing of a 20-year Power Purchase Agreement (PPA) for a 15-megawatt (MW) flare gas-to-power facility near Coleville, Saskatchewan. The Kopahawakenum Flare to Power Facility (KFP Facility), which represents an anticipated capital investment of $30 million, is expected to open in 2023. Kopahawakenum is the Cree name for “Kicking up the Dust.”

“This new project, which will create some 50 jobs during construction and 20 into operation, will be the largest flare gas-to-power operation in the province, generate power for around 9,000 Saskatchewan homes, and reduce emissions,” Energy and Resources Minister Bronwyn Eyre said. “As a methane capture and commercialization project, it is another example of Saskatchewan’s world-class innovation and another step to achieving our goals under the provincial Methane Action Plan.

“This project will use flare gas that would otherwise have been emitted into the atmosphere to create low-carbon baseload electricity,” said Don Morgan, Minister Responsible for SaskPower. “This is a win-win, as the oil and gas operation can generate revenue and reduce its exposure to the carbon tax, while contributing to the Province of Saskatchewan and SaskPower’s efforts to reduce greenhouse gas emissions.”

“Flying Dust First Nation is very proud to participate in this business opportunity,” Flying Dust First Nation Chief Jeremy Norman said. “This project will provide much needed own source revenue to our community and membership for years to come. It has always been a goal of the FDFN to seek and create opportunities and be part of the Saskatchewan Growth Plan. We thank SaskPower, the Government of Saskatchewan, the FNPA, and our partner Genalta Power Corp. for working with FDFN in developing this project.” 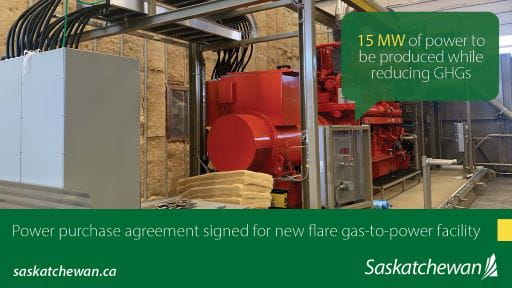 “We are very excited to be moving forward with this project with our partners The Flying Dust First Nation, First Nation Power Authority and SaskPower,” Genalta Power President and CEO Paul B. Miller said. “The Compressed Natural Gas virtual pipeline being utilized by the project will allow for the removal of flaring and venting across a wider area in the province and ensure that we are utilizing as much of the energy from a barrel of oil that is brought to the surface as possible. This solution for flare and vent gas collection for power generation will significantly reduce flare and vent volumes in this area of Saskatchewan.”

“I want to thank Flying Dust First Nation, the FNPA, and Genalta for helping lead this collaborative project from conception through to this agreement today and ultimately through to construction and operation in 2023,” Minister of Trade and Export Development and MLA for Meadow Lake Jeremy Harrison said. “Our province is a global leader in sustainable resource production and this energy facility will also create new opportunities for First Nations communities.”

The PPA was developed through an ongoing partnership between SaskPower and the First Nations Power Authority (FNPA), a not-for-profit organization that works to include Indigenous people in Saskatchewan’s power sector and achieve sustainable economic development and community benefits. SaskPower and the FNPA have signed an agreement to source 20 MW of electricity from power generation projects that use methane from oil production as the fuel source and are led by First Nations communities and businesses.

For more information on this project, please visit saskpower.com/projects.

Journalists can submit information requests online or call us at 306-536-2886 between 8 a.m. and 5 p.m., Monday to Friday. After-hour, weekend and/or holiday support is offered during major situations.